Des Moines, IA (July 21, 2022) - For the second time in two years, Kings Hammer FC will play a 15th match in the USL League Two season. After a postseason appearance in the first season in the League, KHFC clinched the postseason again, only this time finishing second in the Valley Division. The foe in the 2022 playoffs will be current Great Lakes champions, Kalamazoo FC.

Kalamazoo has put together yet another strong season by winning a strong Great Lakes Division. A team built with a strong attack in Cyrus Harmon and Matt Whelan, Kalamazoo FC have won two straight Great Lakes Division titles in their first two seasons in USL2. In 2021, Kalamazoo swept the KHFC matchups with two wins (2-4, 0-1) as they were the only team to beat Kings Hammer in the regular season. Gaining great experience in a nice 2021 playoff run, Kalamazoo went 1-1-1 as they won their first match (3-1), advanced in penalties in their second (1-1), before losing to eventual 2021 champs Des Moines Menace by a 1-2 scoreline.

Kings Hammer FC have found some good fortunes after a slightly bumpy start to the 2022 season. After going 1-1-2 in the opening four matches, KHFC put together a club record 10-match unbeaten streak to climb the table and earn the postseason appearance. It was not all smooth sailing as it required coming from behind twice to beat Toledo Villa, beating eventual Valley Division champs South Bend in South Bend, and picking up a dramatic stoppage time draw against Fort Wayne FC.

A matchup of two high-powered attacks, Kalamazoo FC and Kings Hammer FC were placed together for postseason play yet again as Mississippi Brilla hosted in 2021 and now both travel to Des Moines, Iowa for lone 2022 match between the two clubs. With the first round being Friday evening and night, the Central Conference Quarterfinals play at 5:00pm ET and 7:00pm ET with Des Moines Menace hosting Kaw Valley FC. The winners of each match will the play in the Conference Semifinals on Sunday July 24 at 8:00pm ET.

Notable players:
Taylor Rhinehart (KHFC) - The Xavier University product set club record for goals in a season (8) and now leads the career category too (8) in just one season of play. Rhinehart also added two assists to give him 18 points on the season, another Club record.

Toni Pineda (KHFC) - One of the four High Point Panthers with the Club, Pineda came on strong at the end of the season setting the Club's assist record for the season (6), career (6), and single match (3). Pineda also tallied one goal on the season. 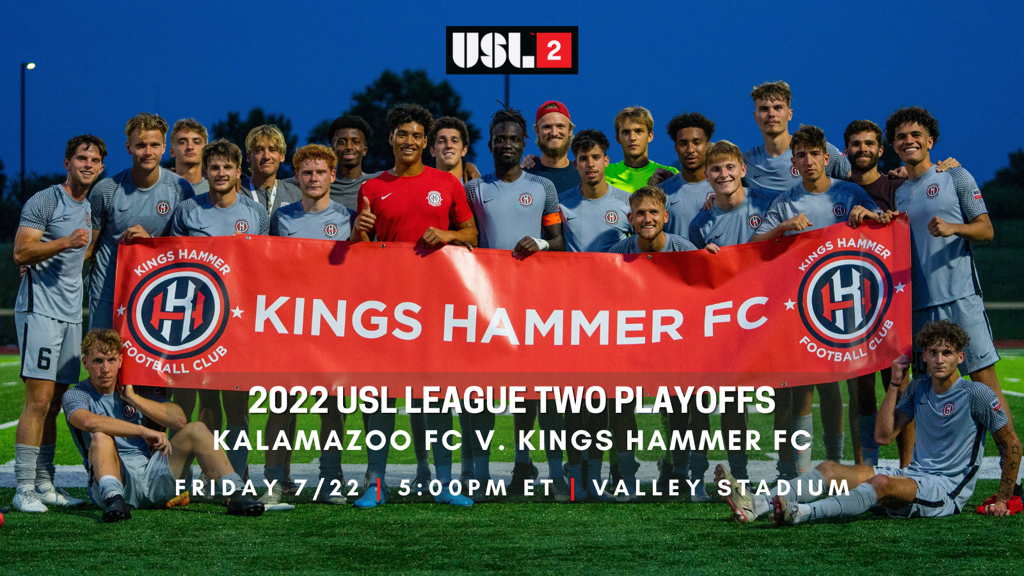